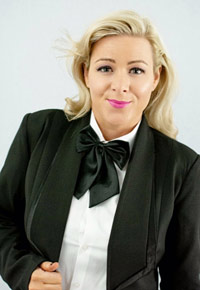 Kellyann McGovern née Hanley, is an experienced actor, singer, tv presenter and thespian. She is known for her versatility and charismatic personality.

Throughout the years, Kellyann has taken on many starring roles in various theatre productions and musicals. TV credits include ITV, GMTV, Trouble TV, Cruel Summer. Commercial magazine and event show modelling. Kellyann has also worked in production for Cinesite London, an award-winning visual effects and feature film animation company. Fun fact, Kellyann used to be in an All Saints cover band and made it to the 3rd stage of the Pop Idol!!